How to Draw a Telephone Frequency Analysis Chart

A telephone frequency analysis chart graphically shows what calls are being made to or from a target phone. The target phone is a circle in the center of the drawing. The other phones form a ring around the target phone. RFFlow can take data from a file and automatically generate the chart. 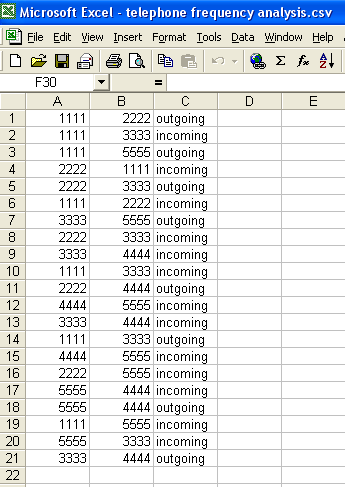 2. Save as a .csv file
The data in Excel is saved as a comma separated variable file. In Excel, click File, Save As, and set the Save as type to .CSV (Comma delimited) (*.csv). Make a note of where you saved the .csv file. If you open the .csv file in Notepad, the data will look like this: 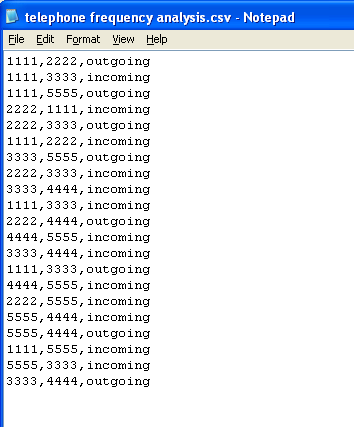 3. Use the Proper Format
The data used in generating the chart must be in a text .txt file or a comma separated .csv file. If you had only a few phone numbers, you could type them into Notepad and save the .txt file. Normally you have so many phone numbers that you need to use Excel and do Save As .csv. The .txt and .csv extensions may not show up on your screen if you are not displaying extensions.

If your data comes from AT&T and they specify that column A is the calling number and column B is the called number, then you should label every item in column C "outgoing" since column A always calls column B.
4. Draw the Chart
After creating the .csv or .txt file, run RFFlow and click Tools, Auto Charts, and Telephone Analysis. A dialog box will ask you to select the data file you want to use. It will show only .txt or .csv files.

5. Select the Target Phone Number
A dialog box like that shown below will ask you to select the target phone number. This will become the phone number in the center of the chart. You can pick any phone number to be the target number. You can also select whether you want a colored diagram or not.

After clicking the OK button, the software will process the data and draw the chart.
6. The Finished Chart
Our simple chart is shown below. The target number is 3333. On the top, 1111 calls 3333 one time. 3333 calls 1111 two times for a total of three calls. 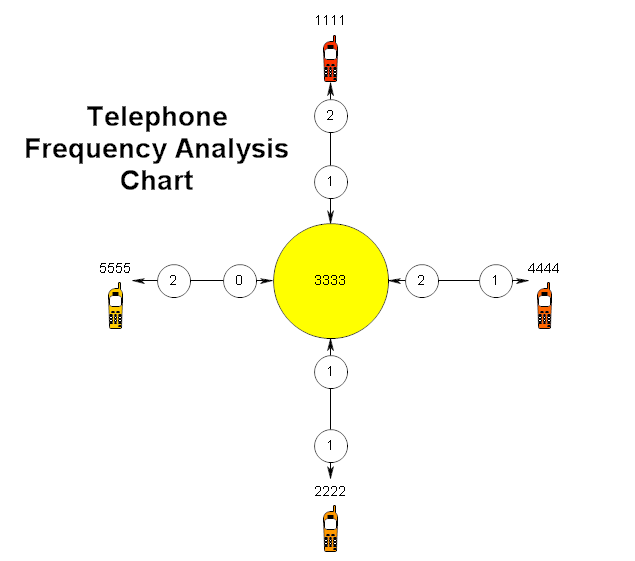 7. Including Names
To include a name with the phone number, simply type the name before or after the phone number. If you want the name and phone number to be on different lines, include the characters \n1 between the number and name. There must be a space after the \n1 for it to work. For example, type all this on one line:

970-669-4889, 970-663-5767\n1 George Washington, outgoing
8. Adding a Title
Since the chart is now in RFFlow, you can add titles and do any editing you want. The chart can be modified as if you had drawn it shape by shape in RFFlow.
9. Saving Your Chart
You save the telephone chart by clicking on File in the main menu of RFFlow and Save in the drop-down menu.
10. Finished
At the end of this process, you will have generated three files. One is the Excel file (.xls) where you saved the data. Then you created a .csv file so that RFFlow could read the data. Finally you created an RFFlow Chart and saved it in a .flo file.